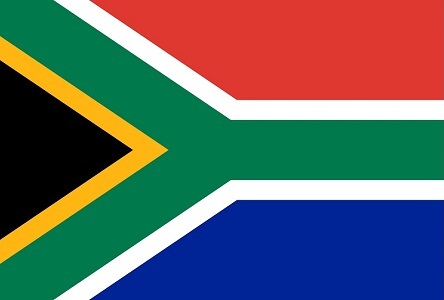 South Africa is a country on the southernmost tip of the African continent, officially called the Republic of South Africa (RSA). It is bounded by 2,798 kilometers (1,739 mi) of coastline of Southern Africa on the south stretching along the South Atlantic and Indian Oceans on the north by the neighboring countries of Namibia, Botswana, and Zimbabwe; and on the east and northeast by Mozambique and Swaziland; and surrounds the kingdom of Lesotho. South Africa is the 25th-largest country in the world by land area, and with close to 56 million people, is the world's 24th-most populous nation. On the mainland of the Old World or the Eastern Hemisphere, it is the southernmost country. About 80% of South Africans are of Sub-Saharan African ancestry, divided among a variety of ethnic groups speaking different Bantu languages, nine of which have official status. Encompassing a wide variety of cultures, languages, and religions, South Africa is a multiethnic society. Its pluralistic makeup is reflected in the constitution's recognition of 11 official languages, which is among the highest number of any country in the world. South Africa is classified as a newly industrialized country and an upper-middle-income economy. Its economy is the second-largest in Africa and the 34th-largest in the world. In terms of purchasing power parity, South Africa has the seventh-highest per capita income in Africa.

Why Study in South Africa

South Africa is emerging as one of the world's most exciting study destinations. This is demonstrated in the rapidly increasing number of international students. Because of international exchange rates, South Africa offers real educational value for money. South Africa's entire educational system, from primary schools to tertiary institution, is in the process of being redesigned for the post-apartheid future. Consequently, this process will be a better, more efficient educational infrastructure. It is one of the world's most exciting places to be a student, as South Africa is a nation at the cutting edge of change.  Education system’s current state in South Africa is richly informed by its turbulent past, dynamic present, and promising future.

Whether you are visiting magical Table Mountain, Robben Island where Nelson Mandela was kept prisoner for 27 years, the Congo caves, the Cradle of Human Kind in Gauteng which is the world’s most important fossil site, the Wine Routes of the Western Cape, or the sleepy coastal and rural towns to learn from the locals, your experience is bound to be authentic and you will be touched and educated. Based in Cape Town, the creative capital of South Africa, you will have easy access to explore different cultural experiences and landscapes while making a notable difference in people’s lives. Cape Town and the Cape Peninsula up to Cape Point are well known for their scenic beauty, celebrity beaches, Table Mountain, whale-watching, world-class shopping, nightlife, food, and a laid-back atmosphere. Garden route, known as South Africa’s Eden, the famous Garden Route traverses an area rich in natural beauty and charm, attracting adventure-seekers and outdoor enthusiasts. The comfortable climate and diverse landscape of South Africa offers endless opportunities for exploration and discovery.

At boardingedu.com, we have listed the Best Boarding Schools in South Africa. The list comprises of the top residential independent schools and state boarding schools.

Find complete information about Top Boarding Schools in South Africa, details about Fees, Admissions, Curriculum, School Infrastructure, Faculty and much more only at boardingedu.com with complete details of fee, school infrastructure. Schools are listed in random order without any rankings.